forgive me, forget you: villnoire in review

caution: this review contains just about every spoiler in villnoire.

villnoire's moralizing about forgiveness denies that victims of racist violence (or even just personal wrongdoing) have a legitimate right to their feelings about it. the wisest survivors sympathize with the complex situation of their offender, and excuse his actions without reservation or resentment. 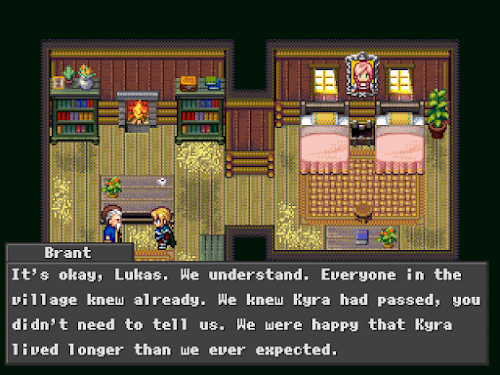 when villnoire does allow survivors to show pain, it's in the form of anger, which the game condemns as a deathtrap, devoid of any value, destined to consume them unless they purge it by forgiving the perpetrator. 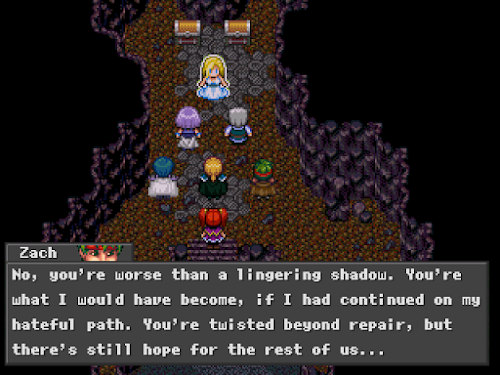 moreover, villnoire shows us time and again, anger is dangerous. it's a slippery slope to murderous retribution. and, as the party's moral authority and sole female voice insists, murder is always wrong. 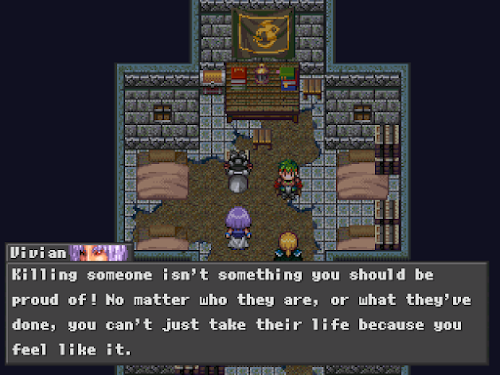 when it comes time to face the big bad, the genocidal fascist king vorian, villnoire stresses the need to extend that principle of forgiveness to him, but this practice is absent from the ending. it's of the utmost importance that we forgive vorian, but somehow not quite important enough to show. forgiveness is only worth depicting when it's for the protagonists. why? 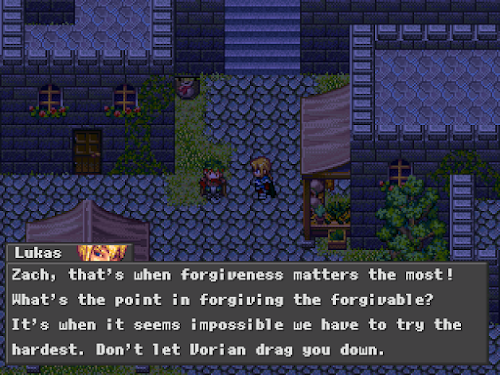 one of the most important observations villnoire makes is that the ultimate cause of racist violence isn't the individuals that perpetuate it, but the conditions that create them. vivian argues that this is why assassinating vorian isn't just wrong (another can of worms), it would be an ineffective solution. 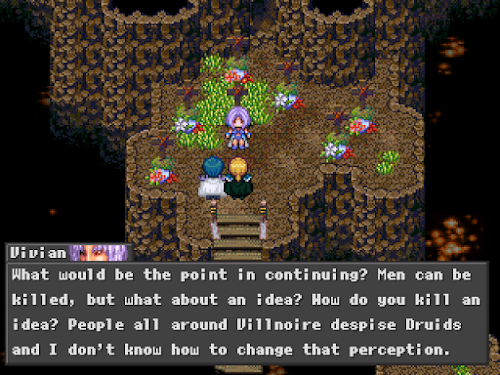 so when, at the end of the game, the party enacts a coup d'etat, incarcerating the racist king so his kindhearted and non-racist brother takes the throne, the story betrays its own arguments. 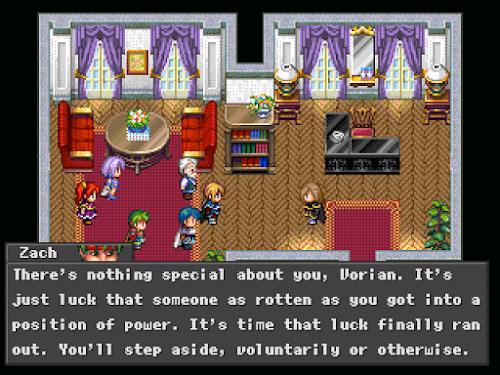 the game's understanding of systemic racism is proven totally immaterial. to replace an evil autocrat with a benevolent one and call it a day suggests that the oppression of druids was the product of one man's cruelty after all - a point the game text denies repeatedly. 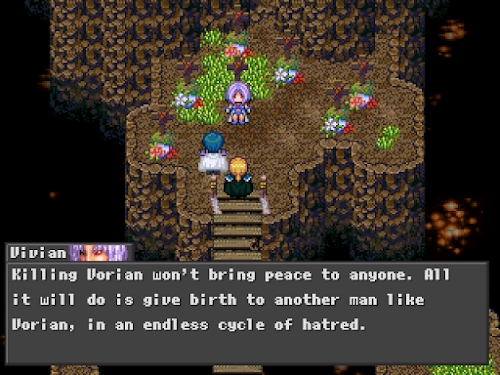 instead of meaningfully challenging the hereditary monarchy or societal attitudes that created and entrenched vorian, villnoire mostly uses the notion of systemic violence to absolve the protagonist of culpability for his participation in genocide. 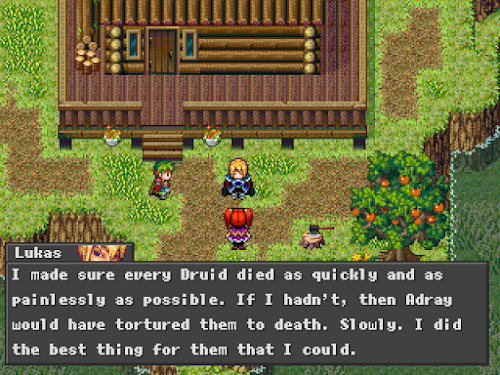 in the end, the game only commits to its ideals of forgiveness when it means people stop being mad at lukas. he's a good person deep down. the only moral option is to forgive him. to villnoire, anger is a kind of harm - it's almost murder, after all - and good people don't deserve that. 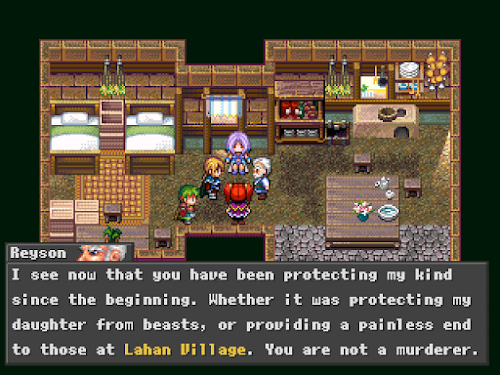 what do bad ones deserve? if villnoire believed forgiveness was meant to for the worst of the worst, it would show it. the opportunity to have second chances, to learn and grow and do better, the right to prove your deep-down goodness is available on-screen only for those we already know to be fundamentally good. the fate of bad people doesn't matter enough to warrant concern or camera, as long as there's compassion for the good. that isn't forgiveness. that isn't justice, love, or revolution. that's just solipsism. 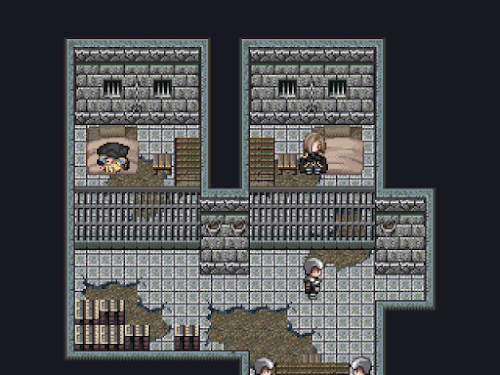 the hollowness of villnoire's theming is disappointing because the foundation of a better story is there. the first half of the game sets up a lot of interesting relationships and tensions between characters. it almost tells an affecting (if simplistic) story of found family among those harmed by fascism across all levels of the social hierarchy, and from start to finish it feels like a complete rpg narrative without ever dragging or becoming tedious. it even teases the possibility of a more radical politics of forgiveness and transformation. but the second half can't deliver on those promises in a satisfying way because the because story cares more about vindicating lukas than about empathizing with the victims of the atrocity committed through him. 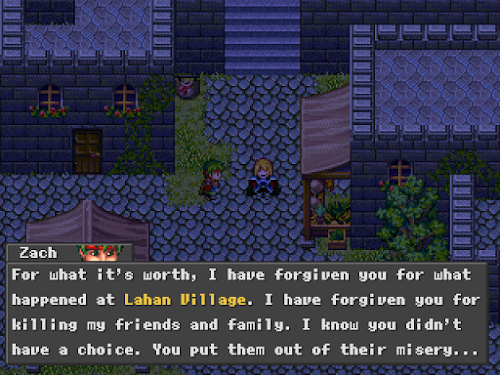 there's much more worth critiquing in villnoire. i've hardly touched on its untenable stance on violence (revolutionary violence is necessary and good, as long as you don't kill anyone), or its subtle but pervasive sexism, or the many other ways it misunderstands systemic racism. despite these issues, i enjoyed my time with villnoire. i wanted it to resonate more than it did. that means i saw something good in it - so i have to forgive its faults, right? it didn't materialize in this game, but maybe it will in the next one. i look forward to seeing what little wing guy makes next. 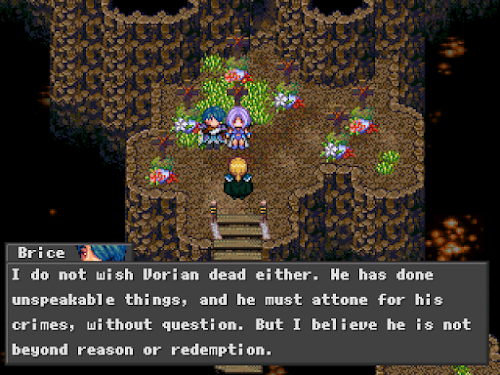 you can download villnoire for free at itch.io or rpgmaker.net.