an account of space and meaning in dragon quest 1


some feelings of place… (click here to see the map at its fullest size)

meaning on the map

meaning is a relationship with a space, and relationships do not form in an instant but are constructed as we anticipate a space, exist in it, remember it, anticipate it again, and so on. in my view there are 3 pillars supporting meaning-creation in dragon quest’s spaces.

... including all of its constituent elements: turn-based fighting, random encounters, stats, levels, equipment, experience points. combat charges the map by adding danger. the threat of death costing time and money (concentrated time) allows random encounters to provoke fear and ease, tension and relief. low walking speeds and frequent random encounters make return trips a lengthy setback, and high equipment prices make every hard-earned gold piece lost on death sting. the threat of death varies with enemy strength and colors the world space on a gradient from safe to hopeless. the threat level is felt in your current location when you ask yourself where you need to go and whether your current resources will suffice to get you there. the tone and confidence of your answers continually tinge the tiles and regions of the map. 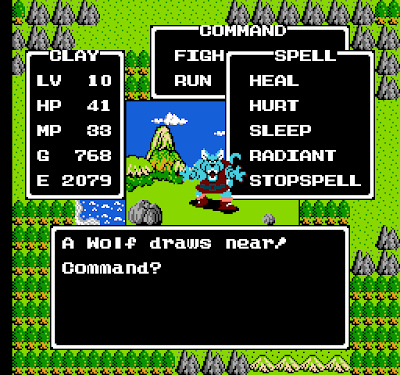 i spend hours drifting around the map trying to figure out: where am i meant to go? where, in this dangerous world, can i go? and then finally, having hit the point where the way ahead is so deadly my only hope of survival is to run from every enemy and hope for the best, where must i go? i survey the fringes of continents looking for missed caves and other hotspots. no one tells me where the next place to go is. wandering in search of clues is much of, maybe most of the experience.

no place is safe the first time i can access it. crossing into an area for the first time is always dangerous, and the first priority is finding out how dangerous. can i survive there? for how long? how far will i have to stretch my resources to find out what there is there? how much further will i be able to travel after another level or armor upgrade? exploring new terrain for secrets and rewards is a process of actively testing the water, making sure i’m not in over my head yet. discovery happens only inside this process, never at my leisure, always at my peril.

rpgs sometimes signal the intended direction of progress by presenting differentially survivable combat zones. if you can’t survive here, it means you’re not supposed to come here yet. dragon quest 1 muddies the signal by frequently making the way “forward” too forbidding to take on, not without an impractical amount of grinding. it asks me to plunge into danger beyond what i can resist with my powers of violence. none of the options available to me are "safe", but one of them will be a little safer to push through.

but even where i can push through the danger, what does progress look like? victories seldom yield new leads. every dungeon i clear is hard-fought but never provides me any direction. is the silver harp relevant to my quest? did rescuing gwaelin really change anything? what does the fighter's ring even do? (nothing, it turns out.) to identify my next objective, i return to old dead ends. i test waters that were too deadly for me the last time. and, if i don’t have any better ideas, i grind for another level or the next armor and see what that changes.

grinding, then, feels more like a passport than a key. i grind a lot, but except for at the very end of the game, the goal is not usually to facilitate meeting a specific goal (beat this dungeon, make it to this location); usually i have a couple dead ends on my radar, and grinding answers the open-ended question of which might open up to me with one more level or the next armor upgrade. sometimes the answer isn’t even on my radar. this experience comes on top of the feeling that i never know just what i’m "supposed" to do, so whenever i set about grinding, it feels like maybe it isn’t actually necessary? maybe i've missed something? but it's my own choice to do it. this is how i choose to continue exploring the world, rather than the price i pay to progress along a clear path. 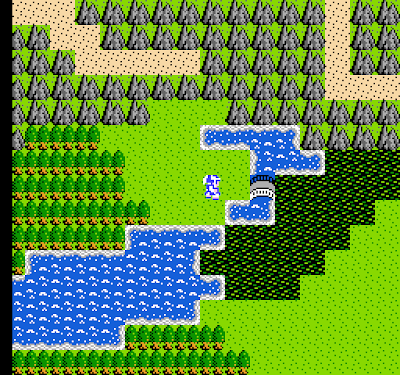 the third pillar: the structure of the world map itself

the structure of the world map ensures i visit most places multiple times. the map is two-dimensional but its functional shape is largely linear, two main paths leading away from the town, west toward cantlin and east toward rimuldar. i walk these paths many times to revisit old areas (rimuldar is like a secondary base of operations) but i also walk them to visit new ones, because new areas are often farther down the old path, or off a different branch. revisiting areas offers a chance to reflect on how the present circumstances compare to the last time i was there, reinforcing old layers of meaning, or else adding new ones as circumstances change. as i grow in power, the land across the bridge cools from suicidal to cautious to carefree. when that territory loses its threat, each trifling monster that approaches me just to run away is a reminder of how vulnerable i once was. the uncertain direction of progress ensures that i have many chances to reflect on old spaces as i wander them at length in search of clues.

the real story of dragon quest is here on its world map, in the small-scale stories of survival on the expanse, and in the larger-scale stories of evolving relationships to space. crucially, the end state of these relationships doesn’t always look like violent domination: much of the map, as well as the interior of the dragonlord’s castle, remained beyond my ability to conquer with force. the oldest, gentlest areas are pacified with the encounter prevention magic that becomes necessary to cut the tedium of repeated travel. this prevents all the space-relationships from converging on the same end state with time. while i lament that the relationships i form with map spaces are defined in all cases by the violence i commit within them, they nevertheless feel personal, rooted in my own experience, arising organically from the interactions i take with dragon quest’s systems inside these spaces as i return to each one at different points in my journey.

one important function of these layered relationships is memory. fantasy worlds want to draw us in, but how do we draw them into us? how do they resist getting their juice sucked out like an orange wedge and discarded when we’re done with them? their ability to resist disposability is their richness: richness of lore, richness of thematic meaning... dragon quest 1 draws another kind of richness from intimacy, found in the multi-textured, evolving relationships i formed with its spaces. in this way it withstands the pull of oblivion, like double and triple knotting a shoelace: time tugs at the memories but they remain fast. it took me three months to find these words and the physical geometry of the map is still vivid in my mind, its emotional landscape still charged.

dragon quest counts on this richness to carry its ending, in which we’re invited to roam the world now completely free of random encounters. what may seem like a waste of time, retreading the map with nothing new to see, is, in another light, an important opportunity. all through dragon quest its spaces are inhabited, reinhabited, revisited - never left behind and forgotten. but the game has to end eventually. if we didn't have a chance to take stock of our relationship to the world map at the point of the relationship’s closure and to reflect on all the ways in which it's evolved, we really would be sucking out the juice out of the orange and throwing it away. the best proof of thoughtful, empathetic, and coherent design in dragon quest 1 is that when it's over, it understands what we need to say goodbye to. 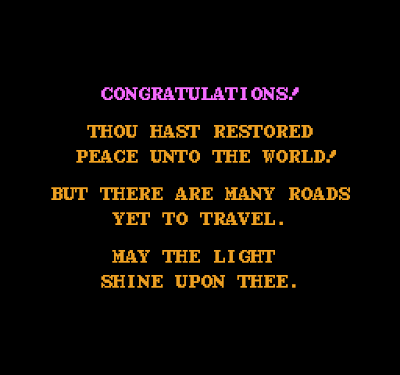