In October I replayed Final Fantasy Legend 3 for the first time since childhood. This was mainly driven by a desire to restore the comfort and optimism of the age (10 or 11, maybe) I associate with first exploring the game, and most of what moved me in my replay was rooted in the same nostalgia. As such, my critical apparatus was mostly disabled as I focused on inhabiting the weirdness of its eerily small, waterlogged overworld and casually strange locales. Despite this, a few quirks of the battle system stood out to me. I have some particular words of praise for the game's handling of the "Guard" command. 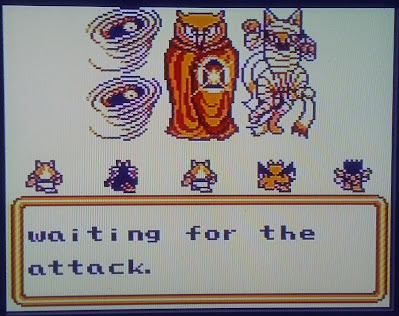 Tucked away on the second page of in-battle commands, Guard is similar to Final Fantasy's recurring "Cover" command, allowing the user to protect a chosen ally from harm by interposing their own body and suffering incoming damage on their ward's behalf. There are a few things to note about Guard:

The decision to make this ability available to every character is noteworthy on its own. Most turn-based RPGs, in my reckoning, are biased toward offensive play. As often as RPG stories celebrate heroic acts and bonds of friendship and love, seemingly few games offer the ability to directly protect a vulnerable party member from harm. Instead, care between combatants mostly takes the form of after the fact healing. Where Cover-type abilities exist, they're usually a specialization of certain characters or classes (usually knights and paladins, in Final Fantasy). In this light, FFL3's universally available Guard command is, if nothing else, unusual.

Further credit is due for making Guard not only universal but robust. The decisions to give it priority in turn order and make it effective against multi-target attacks ensure its dependability. The first avoids the pitfall of tying its activation to the user's speed, which would render the technique useless against fast enemies; the second ensures that a use of Guard protects its target no matter what attack the enemy uses. Not coincidentally, bosses tend to be fast and use a lot of multi-target spells. The combined result in my playthrough was that Guard virtually always behaved just how I needed it to, no matter who used it. When the need arose to protect a vulnerably ally from damage, Guard served that purpose reliably and effectively enough to spend a turn on it.

The final point is the most important one: the need for targeted protection actually arose enough to take advantage of Guard. Bosses in FFL3 tend toward the difficult side, but by the time I reached Pureland (roughly the second half of the game) they picked up an especially nasty trick: Whereas the pre-Pureland bosses acted at a consistent point in the round as determined by their speed (like any other enemy), the bosses in Pureland had a roughly equal chance of attacking at the very beginning or the very end of each round. This allowed them consecutive actions, potentially striking the same ally twice in a row without a chance to heal their injuries in between. By this point in the adventure, bosses hit single targets hard enough to kill them in two hits, which presented a serious threat in a game where the power to revive fallen allies in battle comes very late.

In these deadly encounters Guard became essential, as its priority in the round allowed me to intervene even when the boss made the first move in the round. Consequently, throughout Pureland, Guarding turned battles where I might otherwise have flailed in frustration against the RNG into tense, thoughtful victories. I survived the encounter with Dahak, who felled two of my party members early in the fight, because the surviving three could enact a mostly stable rotation of covering and healing each other between taking swipes at the boss. The four or five boss battles in which I predicated my victory on judicious Guarding were the most strategically rewarding in the game, standing out as high points in my time with FFL3's mixed bag of a battle system. 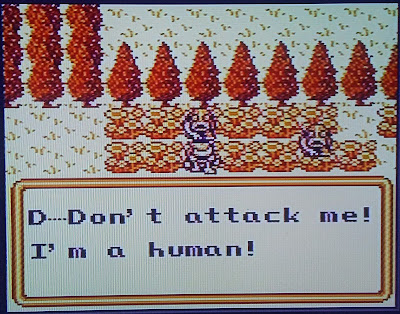 Final Fantasy Legend 3's approach to Cover-style protection was fun for me, but it's also kind of a mundane success. To accurately identify the conditions for an interesting ability to see strategic usage and fulfill them isn't brilliance—it's just good fundamentals. But fundamentals are worth appreciating, especially in a genre with a reputation for shallow imitation, and in an era whose design values aren't always understood or agreed with in modern analysis. FFL3's Guard experiment feels especially relevant to me as I contemplate team dynamics in RPG Maker 2000, where the default battle system supports few defensive options besides plain old healing. Isn't it weird that this isn't a more normal part of RPG skillsets? Maybe this is a sign that I should finally switch to a more modern engine. Ah, but I'm not done with my nostalgia quite yet...